On the Grammy-winning EP Rapture, Koffee—real name Mikayla Simpson—unveiled her creative blend of reggae, dancehall, and sculpted rap flows, the world bowed. Koffee became the youngest and first female winner of the Best Reggae Album award, which was also a historic accomplishment. The pandemic could have slowed her development, but she instead drew on Jamaica’s rich musical tradition (the spirit of Bob Marley can be heard on “x10,” while “Lonely” is a lovely homage to ’80s lovers rock) and the expertise of her live band to create a stunning, rich debut album.

excited that we were able to do so, especially at a time when people really need us to share this message.” When I hear these songs again, wonderfully orchestrated and brilliantly done, I feel honoured, as if to say, ‘Yeah, I am gifted.’”

Listen to Gifted below. 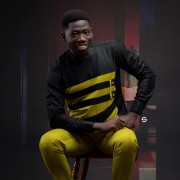